Had a lovely weekend.Our son D in law and new baby came to sunday lunch and i made a lamb dinner followed by jam sponge and custard (all with sweetners as hubby is diabetic) and a bottle of fake champers to celebrate our first visit by our grandaughter.Lovely full tums and lots of baby cuddling,my idea of heaven.
Then went to hubbys cousin for a gathering of the clans.Their daughter had a firm to trace their family tree and gave it to her parents for their anniversary so all the cousins were gathered for a buffet and old time stories and photos.Really interesting and a smashing unusual prezzie.Went to bed really tired and slept for the usual 3 hours ,then awake.I have a cold and am on antibiotics for chest infection.Have had more antibiotics in the last 3 months than in the last 20 years.Because my treatment is constant my immune system is constantly being compromised.Most treatments have a week or two break to build up but not this trial.i dread to thing what state I would be in if i was not taking the Astragalus a nd cats claw.I now take vit d3 as this is reportedly good for fighting the rogue cells and 3 times a day 2 spoons cottage cheese with 1 spoon flax oil.One can but try.
Went to the hospital today as they are monitoring me weekly after my breathless episode.Prof is on hols so saw Dr Maldi,his 2nd in command.Physical exam OK and bloods back up just above borderline so carry on treatment and he asked if this was OK.i told him how I would prefer to be on the higher dose as the tumours shrank then but i was so grotty the dose had to be lowered so he said ".I would suggest you stay on the reduced dose for now but will be guided by you as it is your body and your life.You tell me what you want to do" so I opted to stay on the reduced and see what the scan shows in 2 weeks time,but it is nice to know my thoughts are considered and I am not just a trial patient.
I really must stay home more and not carry on as if there is nothing wrong with me,no wonder i catch so many bugs lately......Perhaps next week.
Time to do some cleaning.
Posted by Rose at 08:20 2 comments:

Annabell final entered the world at 7 am 13/8/2010 weighing 8 lb 11 and with a mop of black hair.Mother and baby fine.
No interesting news healthwise.Back on the reduced dose for a couple of weeks and feeling OK.Have read a couple of sad posts on Cancerchat especially one from the Phillipines where a lady has cancer and is being treated by faith healers as there are no treatments available to her.We are so fortunate here.I felt really humbled reading about her and so annoyed that people have to be left like that with not even painkillers to help them.
Off to see the baby now.Lots of cuddles and blubbering.
Posted by Rose at 10:48 1 comment: 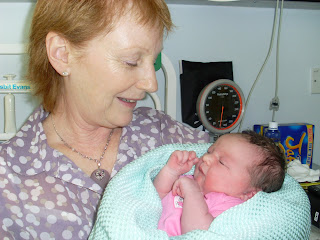 Today I went to see my oncologist,Proffessor Wagstaff.(Love that name !! Hello,I,m Proffessor Wagstaff sounds so much better that Bert Jones )for the results of my last scan,which I already knew as the nurse rang me the minute they came in,and he was delighted that the tumours had shrunk.The largest,which is in my neck is now 4 times what it should be not 5 times.He has decided to keep me on the lower dose for next 3 weeks .The dilemma is if I stay on the lower dose the tumours are contained and stay the same size but if I have the higher dose the tumours will shrink (hopefully )but I will be totally wiped out. We shall see what happens.When I told him I had taken Penicillin as they must be told everything for the trial,for an infection in my new root filling he told me "you shouldnt have root fillings on Sunitinib".It reacts with the gums and can produce a germ that eats into the bone.I told him it is too late now so fingers crossed nothing happens.
Still waiting for our grandaughter,now 8 days overdue.Hope she will be this laid back when she is born.Her dad was a lovely baby so hopefully she will follow him.
Posted by Rose at 10:22 2 comments: 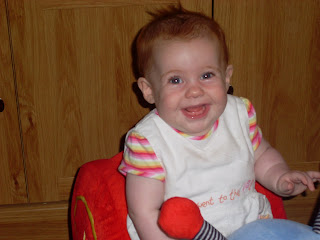 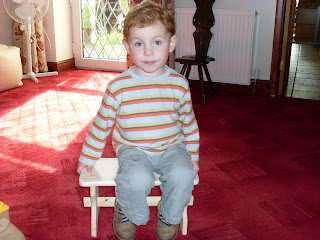 Rose
Married to Ricky for 23 years.1son Christopher and 1 daughter Debbie